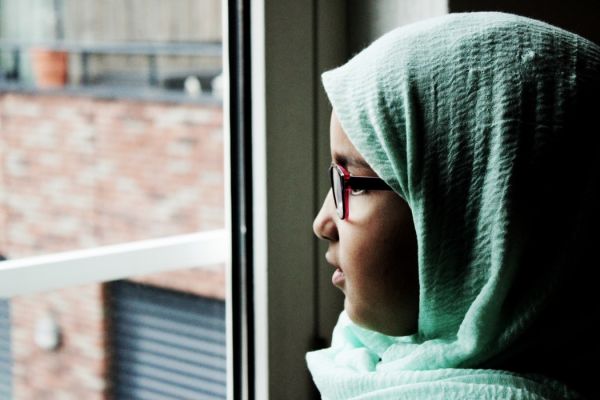 Aisha looked at the clock and knew if she did not hurry she was going to be late.

Mama would not be pleased.

It was Aisha’s first day at her new school. She did not really want to start at a new school.

It meant she would have to start everything again.

Make new friends. Get used to the teachers.

Aaaargh, she wanted to cry.

Why did they have to move from their old home?

She knew why and she felt the tears again.

Her parents were no longer married to each other that was why.

She and Mama were living with Bibi now and so a new school was necessary.

“Aisha!” Mama shouted from the kitchen.

Sighing, Aisha picked up her bag, put on her hijab and went to wait in the sitting room.

Bibi came in, hand on her walking cane.

“She doesn’t want to eat. I don’t know where she will find strength from. I have no idea what food the school canteen offers.’ Mama said as she gathered her things and pushed Aisha out of the door.

“Maasalam, Mama, say a dua for us!” she called out while flagging down a tuktuk at the same time.

In the tuktuk to school, Mama said:

“Don’t forget to pray dhuhr on time. Make sure your hijab is tied properly: do you have an extra hijab pin in case you lose that one?” Mama’s rapid-fire instructions were making Aisha even more anxious.

She did not want to be here. She looked around to see if there was somewhere she could escape to. Now she knew why kindergartens howled on their first day of school.

Everything was so different.

The uniform was different; it was heavy- and the colour the same green as a scum filled pond.

There seemed to be hundreds and hundreds of pupils both boys and girls.

Aisha wished for a familiar face.

Then, all too soon, it was time for Mama to leave. Aisha tried to put on a brave face but failed- she was scared and overwhelmed.

Mama pulled her into a hug.

“Everything will be fine, Aisha. It will work out for the best, dearest, you will see.”

She was sat by herself at the front of the Grade 5 class. Even with her thick eye glasses, Aisha still needed to sit close to the blackboard in order to see properly.

The classroom was on the first floor and you could see the P.E. field from the window.

Her new school was really an old school. Bibi had told her that Aisha’s grandfather had once been a pupil there.

It was made up of old buildings which nevertheless had big and bright classrooms. The walls of Aisha’s class had charts and motivational quotes and there were lockers in the corners for them to store extra books and materials.

While she knew most of the answers to the questions the teachers asked during lessons that morning, Aisha did not raise her hand.

She felt shy and out of place.

She also did not want to be known as a ‘know-it-all’ on her first day.

And then it was break time before she realized and Aisha felt hungry. The bell had rung loudly enough to hurt their ears. She supposed with a school this big the bell had to be heard by everyone all across the extensive grounds.

The boys all rushed out before the teacher was even properly out of the door. Aisha turned to look behind her and saw some of the girls were still writing. Some had food tins and juice bottles which they were opening, eating and drinking from.

The hundred shilling note in Aisha’s hand was getting soggy from her sweating palm even though it was a cool day. She remembered the school administrator pointing out the canteen to them but there was no way she was going to go there by herself and risk dying by a students’ stampede. One thing she knew was that breaktime at any school was a dangerous time. Hunger made you do abominable things: pushing and elbowing the least of them.

A tall stick thin girl stood in front of her. “You know where the canteen is?”

Before Aisha could say anything the girl took her hand and said, “Come, I will show you.”

As they passed the other girls, Aisha noticed that one of them was not actually sitting at the desk but in a wheel chair pulled to a small table next to her desk mate.

“Buy me ‘kachri’, please, Asma.’ said the girl in the wheel chair.

“You are going to the canteen?” said another girl. “I will come with you. Hello, I am Evelyne.”

All too soon break time was over. Aisha learned that the other three girls who had remained in class during break were Amina, Maryam and Mercy. Amina sat together with Mercy who, it seemed, loved to play with the wheels on Amina’s wheelchair. Maryam sat with Evelyne and Asma sat at the back with someone named Husna who was absent that day.

Aisha did not speak much; it still felt so strange to be here, in a different part of the city in a different school with girls she had only just met.

But they were friendly and Aisha thought of her mother and grandmother most certainly making duas to Allah for her to make new friends quickly.

It had been a long, tiring day and Aisha was glad it was over.

“You will get used to your school and your classmates,” Bibi told her.

“Bibi, may I please use the tablet?” Aisha asked her grandmother.

“Don’t you have homework?”

“I have finished it.”

“Have you revised your required Quraan hifdh (memorization)?”

“Have you laid out your uniform for tomorrow?”

“Finish up all that you are supposed to finish and then you can have the tab. But you know that you cannot spend more than half an hour on it, don’t you?”

“There is a girl in a wheelchair in our class,” Aisha told Bibi.

Bibi did not say anything. She waited for Aisha to continue.

“It’s like as if she is not in a wheelchair. She doesn’t seem to notice it and everyone treats her the same.”

“I was feeling sorry for myself that Mama and Baba don’t live together anymore. Amina is happy and is not worried that everyone walks with their two legs but she has to wheel herself around.”

“I think that is because she does not see that as a problem or a reason to feel sad. “

Bibi took her grandchild’s hands in hers. “You can feel sad that your parents are divorced. But it is not your fault that they are. Do you understand, my dear?”

By the end of the first week of school Aisha could find her way around by herself.  She had learnt the names of most of the teachers and all the good people who helped make her school day special.

Her parents and grandmother had taught her that she was to greet everyone she met at school. She had to say thank you to everyone whether they were her fellow pupils, her teachers, the gatekeeper- everyone mattered and everyone contributed in their own way.

She got to school even earlier than usual one day on her third week at the school. None of her friends had arrived and so Aisha sat quietly reading a storybook she had borrowed from the school library.

Someone slapped her sharply from behind almost knocking the book out of her hands.

A girl she did not know stood over her- Aisha had not even heard her coming in.

The girl was taller and bigger than Aisha. Aisha tried to remember which class she was in but could not.

Suddenly, without warning, the older girl grabbed Aisha’s glasses and yanked them off her face.

Without her glasses, Aisha was helpless- she could not see or do much.

“Give me back my glasses!”

Just then, the other students both boys and girls, started streaming in.

As if nothing had happened the girl returned the glasses back to Aisha. But not before putting a finger on her lips and narrowing her eyes at the smaller girl.

“If you tell anyone about this…” her look said.

“What was that one saying to you?’ Asma asked.

Aisha could not look up at her friend.

“You be careful with that one. She is mean and she likes to pick on the quiet ones. I am not afraid of her but we all stay away from her. She is trouble.”

“If people know she is mean why does no-one report her to the teachers?”

“Because no one wants to go through all that. And she has friends who are just as mean as she is. Best thing is stay away from her.”

“Yes, but what if she doesn’t stay away from me?” Aisha said to herself.

Aisha made a point not to answer many of the questions that day. She knew it was a cowardly thing to do but she didn’t want her eyeglasses taken away. They cost a lot of money although she knew her father would replace them quickly if they ever were to break or if she lost them.

How would she explain a bully forcefully taking them?

Aisha knew she was good at many things. She knew her parents loved her; she knew- as they and her grandmother and her ustadhas had taught her many times over- that action, prayer and asking Allah for help could solve any problem.

She was good at many things, that she knew, except for standing up to bullies.

In their old neighbourhood when they were still living with her parents, there was an elderly lady who was always scolding the children for every little thing they did.

When they played outside during the cooler months she would complain they were making too much noise. When they sat reading quietly on the concrete bench outside their homes, she said they were up to some mischief and that she would report them to their parents.

The other children soon began to lose their respect for her and they would rudely imitate her when she spoke but not Aisha.

Aisha knew better than to disrespect elders even when they were as annoying as their old neighbor. But she would not know how to stand up for herself even if she was a child without good manners.

She always wished that she was brave like they were; they spoke their minds and were not afraid to disagree with others.

Aisha, with her big glasses, chubby build and her love of hijab since she was two years old made her feel ‘different’ from a young age. Which was why when Asma and group welcomed her as their friend she was surprised and very pleased.

No. She would not say anything to anyone and she was definitely going to stay out of Salha’s way.